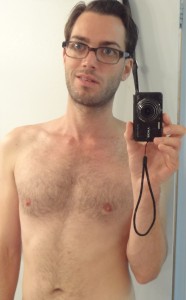 So, for the last ten years I have self-identified as a gay man.  I came out of the closet in November of 2003 to a family and social circle that was highly partitioned.  On one side of the divide I had a very traditional family and upbringing that viewed homosexuality as an abomination, sex outside of marriage as ungodly, and pornography as sinful.  On the other end of the spectrum I had my newer friends.  Many of these friends I met at the Outlet, my university’s LGBT resource centre.  At the time I believed these friends to be enlightened and forward-thinking people who had learned to accept and celebrate themselves just as they were. They were flaming homos or car-fixing dykes that society just had to accept as they were and that was that.  Only after coming out to my mother did I realize that I had crossed a threshold that many of these “out and loud” friends were afraid to do themselves.

Let me put my coming out in perspective a bit. At the time I lived in a town of 60,000 people in Kentucky, not quite the buckle of the Bible Belt but close (perhaps that awkward flap of belt that hangs out once you’ve buckled it and you’re never quite sure what to do with).  As gay young men in a relatively closed-minded society my social sphere and I took our cues on gay culture from Queer as Folk and perhaps a bit of Will and Grace.  (If you just shuddered, good!)  Though Will and Grace had been on the scene for years (debuting in 1998), Queer as Folk (airing from 2000 to 2005) was the first popular show to openly talk about issues revolving around urban gay club culture and the inherent sex involved in that scene.  Consequently, my peers and I found and created for ourselves gay identities that mimicked those of Brian, Justin, Michael, Emmett, and/or Ted.  Brian, Justin, and Emmett were the characters that most of us wanted to emulate.  Brian and Justin were beautiful men who had gorgeous bodies and lots of sex.  Emmett was a bit of a queen but also had his sexcapades and, as we later found out, a very large penis.  Michael and Ted on the other hand were geeky and nerdy and had a bit less luck in the sex department.  These characters were my generation’s first glimpse into the gay world beyond those few people in our own social circle.  They were our role-models (a thought that terrifies me in hindsight), and they subconsciously taught us what beauty was.  Brian, Justin and Emmett were beautiful while Michael and Ted were awkward.  What, you may wonder, was the only thing that our three Adonises had in common?  They all three had a noticeable lack of chest hair.

So for the following nine years or so I was under the impression that shaven chests are somehow more attractive than natural chests (mind you that I am a naturally hairy fellow, but I do not mean to frown on those who are naturally smooth).  This view was reinforced by advertisements such as those by Abercrombie, Dolce & Gabbana, Calvin Klein, and the mainstream porn industry, to name but a few guilty parties.  For years I was asked by my boyfriend to shave my chest; I wouldn’t even go to the beach without getting rid of my hair.  In fact, I was so brainwashed that I believed it was legitimate for others to withhold affection until after I had tamed my chest hair.  I also started to view men with hairy chests as lazy.  I had so completely invested in the idea that smooth was somehow better that I looked into permanent hair removal options.

Only in the last year have I realized the absurdity of this lie.  I can pinpoint a turning point in my opinion, though not perhaps the thought process that led me to that moment.  I remember I was getting ready to go on a date and I picked up my clippers, ready for stage one of trimming the chest hair.  I looked at myself in the mirror and thought, “Self, you know something? I DON’T LIKE SHAVING ALL THE TIME!”   It was in that moment that I realized that I wasn’t looking for a relationship that valued me for my hairless chest.  The reality is that I’m not hairless, and I’ve done a lot of work on myself over the last years to learn to accept me for who I am, hair and all, and I am worthy of a relationship that values me for who I am as well (as are we all).  I put down the clippers and was prepared for whatever might come in the event that my date got under my shirt.

Well, he did.  And guess what, he didn’t say anything… at least not at first.  When he finally did comment on my chest hair it was positive.  WHO KNEW!?  So I decided to take this new-found hairiness a step further.  I took some new pictures of myself in non-mother-approved attire (read scantily clad or just not clad at all) and put them out there for the world to see (don’t worry, I’ve cropped them so as not to jeopardize a future political career).  I had previously had some shaven-chest pictures up online, and I got the occasional message or flirt.  But this was different.  I put my natural body online, bare and unshaven, and was ready for whatever reaction I would get (I actually didn’t expect much of a reaction at all).  To my surprise people are into otters (furry skinny gay guys).  Since, I’ve had a lot of positive comments on the chest hair.

Now, I’m not suggesting that public opinion should be the deciding factor as to whether or not I should shave.  Rather, I’m saying that I had for years believed a lie that beauty doesn’t have room for chest hair.  I let fear of rejection con me into spending lots of money on razors (and debating spending a lot more on laser hair removal).  I doubted my own self-worth because of my genetic code, and allowed myself to feel frustration at my body for no good reason.  When I faced that fear, I discovered that there are people out there who DO appreciate exactly what the mainstream media says is imperfection.  As a matter of fact, the most important thing is that I appreciate it now too.  Will I never shave again?  Well, I probably will, mainly because saltwater in long chest hair kinda feels funny.  But if and when I decide to shave my chest hair, it will be on my terms, and not because I feel that shaving (or not shaving) somehow impacts my value in the world.  After all, if someone values me based on not having (or having) chest hair, maybe my social sphere is what is really in need of a trimming.

If you want to talk about men's issues in the LGBT community, Remy's your man. Not only has he been actively engaging with LGBT people about issues within the Rainbow Community for years, he's got the wit and the sass to knock your socks off.

4 comments on “A Funny Thing Happened on the Way to the Razor: Gay Men and Chest Hair”