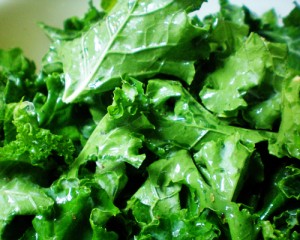 [Photograph shows kale leaves tossed in olive oil, about to be made into kale chips, something that is often considered a staple in a healthy vegan diet. Whatever that means.]

I don’t even really know how to define what “healthy eating” actually means. It’s this concept we throw around and to be perfectly honest, I don’t know if there really is a definition at all. What I do know is that people who associate fatness with unhealthy eating are always shocked to hear I’m vegan. So I imagine veganism has become synonymous–at least in some people’s minds–with healthy eating. Let’s use that as an example, then.

So yes, I’m vegan. A lot of people online know it, because I have a vegan cooking blog. But offline, you’d hardly know. I’m flexible about it when I feel I need to be, and I also refuse to be an obnoxious person about it by preaching to other people.

But I do know a lot of vegans, and I’ve seen a lot of really interesting gaps between what vegans often prescribe and an understanding of how economic class impacts lifestyle choices.

I’m in a position of tremendous privilege, education-wise. I have a graduate degree, and it’s helped me tremendously in processes like looking for work. But considering where I started off, financially, it’s kind of shocking that I am where I am (at the time, I was straight-acting, white, abled, and passed for middle-class, and that certainly helped a lot, as there is a ton of privilege that comes with those identities).

In my nuclear family (and I’m not an only child), I’m the only one who ever finished high school, nevermind attending university. When I was a teenager, there were a number of times when I was the only one in the family that was employed. I worked 70-hour weeks each summer at a minimum-wage job so I could save up enough money to go to university, and sustain myself through the year so I could spend time studying for high grades. I got them, and then I got a few scholarships, and the rest is history. It was fucking hard, and I usually relied on the bullshit luck of being in the right place at the right time, and depending on my white/abled/straight-passing privilege. I can’t even start to imagine how impossible this outcome would have seemed to someone who didn’t carry all of that privilege with them.

I’m telling this story because I’ve heard what vegans and purporters of “healthy living” prescribe to people. I’ve heard statements like, “Anyone can be vegan–it doesn’t need to be expensive!” And if someone had said something like that to me when I was 19 (earning $10,000 in a summer on minimum wage), I would have laughed in their face. It’s an incredibly classist thing to say, even to the abled, white girl. And I’m fully aware that I’m vegan now largely because I can afford to be vegan, because I’m not dirt poor anymore.

Most people know that poor people don’t have money. But what a ton of people have no concept of is what else poor people have none of. Chiefly: time and energy. And these are huge, key factors in lifestyle. Sure, being vegan can be cheap if you’re buying a bunch of fresh produce and grains and cooking everything yourself, but not everyone has time for that shit.

If you’re a single mom who’s working two minimum-wage jobs, you probably don’t have any time to cook or sometimes even eat. You’re also totally exhausted–physically and mentally–by the time you get home. You’re not exactly going to get back and be like, “All right, kids! Let’s make a delicious and nutritious chickpea curry!” You’re going to pick up fast food on the way home, dump it on the kitchen table, and pass out from exhaustion. After all, you’ve probably just worked a double shift on about 6 hours of sleep. And that’s if you’re “doing everything right” (don’t even get me started on the shit that people deal with for collecting government cheques).

But people who don’t deal with these realities don’t understand them. They start preaching compassion for animals and health standards (and, by the way, we still don’t even really know what “healthy eating” means anyway), when maybe we should be preaching compassion for humans. There are systems in place that are actively undermining vast chunks of the population. How about we work on those?

Is the meat industry a nightmare in terms of the social and environmental impacts it has? Absolutely. Is the answer to guilt the poorest of the poor people you know for eating whatever’s fast and cheap? Absolutely not.

Those who can afford it, totally. Please be vegan. Please help us dismantle this industry that’s wreacking havoc on the environment, on aboriginal communities, you name it. Do your part to pick up conscious consumer habits where poorer people can’t. I totally condone that.

But for the love of all things good in this world, don’t pretend you can understand the realities of other people who don’t have the same privilege you do and decide for them what choices they need to make. If you do, you’re adding to the problem, not being part of the solution.

2 comments on “Classy lifestyles: “healthy eating” isn’t for everyone”